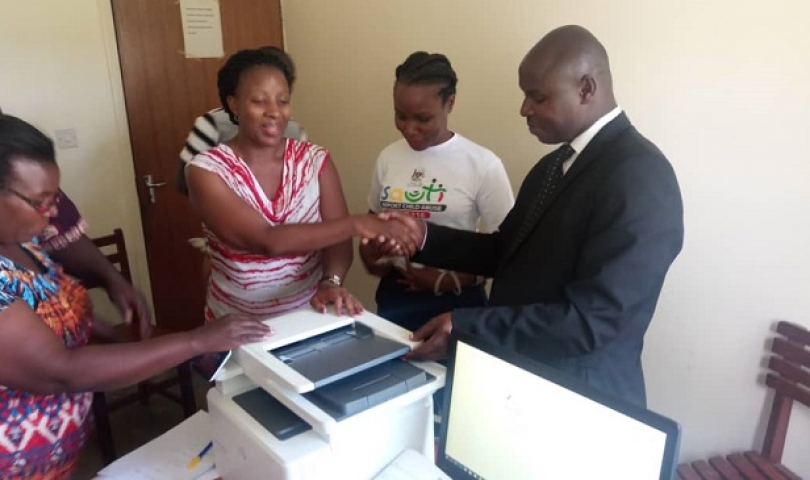 Ntungamo district has received equipment to enable the operationalization of a Uganda Child Helpline Action Centre.

The project under the Ministry of Gender, Labour and Social Development with support from Catholic Relief Services has equipped the district with a new desktop computer, Printer, deskphone, modem chair and table and will be manned by officers under the probation office.

While receiving the equipment at Ntungamo District Headquarters, Ntungamo District Deputy Chief Administrative Officer Leonard Ahimbisibwe , commended the Ministry and Catholic Relief Services for the initiative saying that the district is committed to ensuring that cases of child abuse are addressed.

Ahimbisibwe also called on all the district employees and leaders to jointly popularize the 116 toll free number so that children can report the cases in their respective areas.

Smark Sengendo the project Information Technology Support Officer revealed that the platform is vital in tracking the cases right away from the day they are reported and up to when action is taken on them and the victims have received the necessary support , care and protection.

Antoinette Angwech the Uganda child help line call centre supervisor in the Ministry of Gender, Labour and Social Development revealed that the platform will be supported for a period of one year with airtime and internet after which Ntungamo district is expected to take it up fully for continuity.

With the helpline or Sauti (Swahili for ‘voice’) launched, officials and rights activists are optimistic that the wide-spread abuses of the country’s youngsters can be reined back.

Deprived access to education, food, basic healthcare, exploitative labor conditions, physical torture, sexual harassment, corporal punishment in schools, neglect and defilement are among the most forms of child abuses in the country.

By calling 116 (on all telephone networks), anyone can report any case of child abuse.

Once recorded at the national child helpline centre (currently housed at Kireka Rehabilitation Centre along Namugongo road), the information will be relayed to respective area action centers for quick response and emergency support services required to stop suspected child abuse.